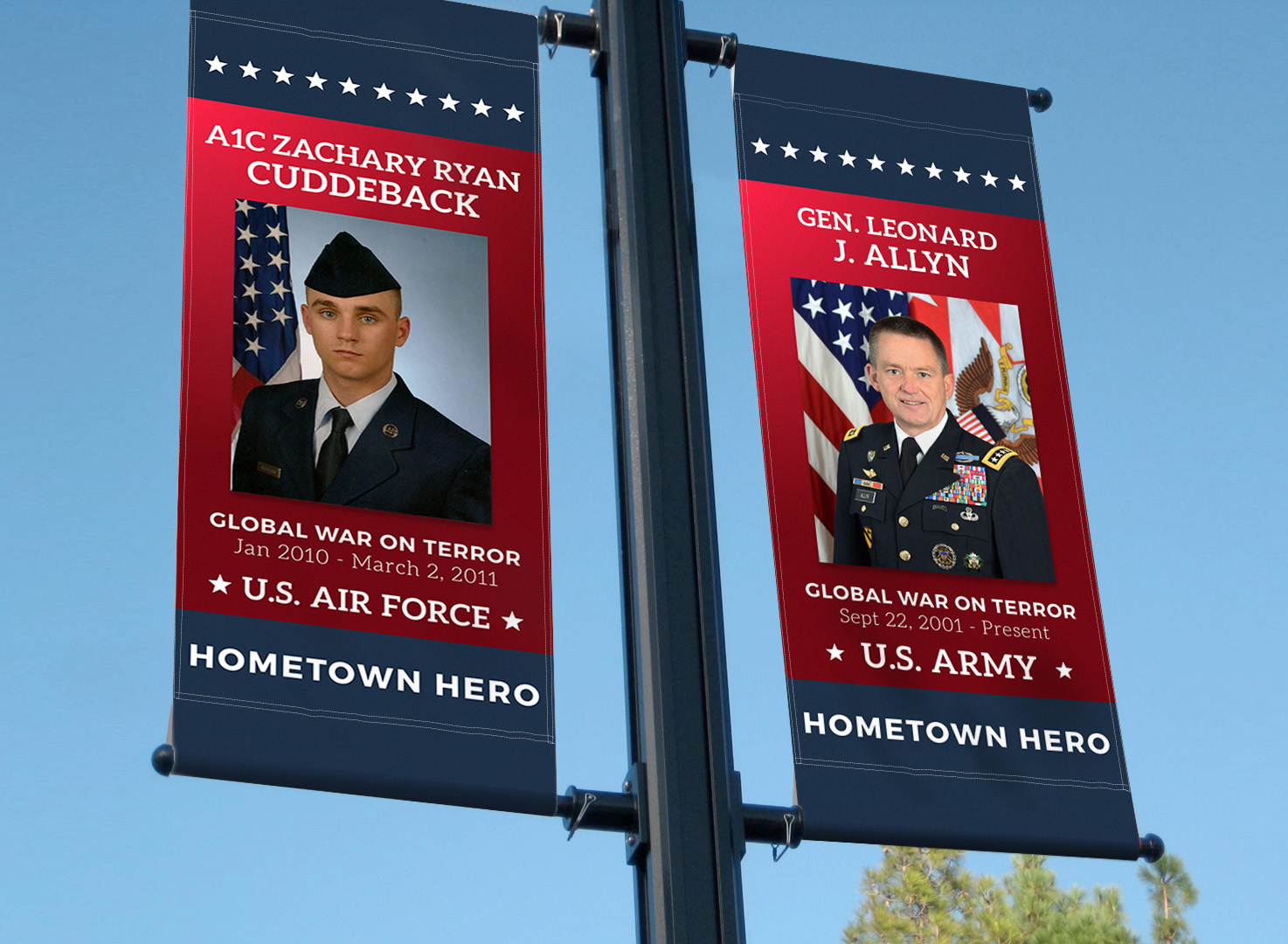 For many of the residents of O’Fallon, military service and first responders are not an abstract concept. It’s something that they have done, their family has done, their friends or loved ones have done. With its close relationship to Scott Air Force Base, O’Fallon is home to many veterans and families of service members and first responders. The O’Fallon Hometown Heroes Banner project is designed to pay tribute to the many members of the United States Armed Forces, and O'Fallon's First Responders who have lived in our town. In its inaugural year, the project will feature 40 banners dedicated to individual service members and first responders, placed on light poles in downtown O’Fallon. For some families, the banners offer a way to celebrate service members who are no longer with them. O’Fallon resident Shelby Blanchard Stogner says, “My father, retired Air Force SMSgt. James Blanchard, passed away before his first grandchild was born. I will be very proud to be able to show my son his grandpa’s picture hanging from a banner every time we drive through town.”Hometown Heroes banners are also a great way to celebrate O’Fallon residents who are currently active duty service members, or those who have retired or been honorably discharged. This year is also our first year that we have opened up the program to active or retired first responders. The sale of banners, each year, will begin on August 1st and end on October 31st for the following year’s program

Honoring past or present members of the Armed Forces and First Responders with a Tribute Banner. Banners are 18x38 and will be hung along O’Fallon and Shiloh streets from February 1 - October 31. When the banners come down, there will be a Recognition Ceremony to return the banners to individuals/family members.

Airman First Class and Hockey Player Extraordinaire Zachary Ryan Cuddeback’s life was ended abruptly on March 2, 2011 while serving his nation in the Republic of Germany. Zac was shot and killed in the line of duty by an Islamic Terrorist. Zac was an Army brat that called many places his home but had a special place in his heart for St. Louis, Mo. Zac was born on July 6, 1989 at Scott Air Force Base, Ill.

Zac’s love of the Air Force, Cars, Hockey, ODU, and his fraternity were paramount in his life. He always had a smile on his face for everyone, but had no closer friend than his brother Tim. Zac is survived by his Mom, Celia "De" Loyet; Dad, Bob Cuddeback, brother and best friend, Tim Cuddeback, all of Virginia, and Einstein, his puppy. He is also survived by his grandparents, Lois "Tiny" Loyet, of O'Fallon and Daniel and Barbara Cuddeback of Millerton, N.Y., and many loving aunts, uncles, cousins, and friends. Zac was escorted home from Germany by his cousin and best friend Airman First Class Neal Bevirt. Neal was deployed in Afghanistan proudly serving the United States of America. A1C Zachary Ryan Cuddeback lived by the motto:“Honor Super Omnia” Zac is best described and will always be remembered as: “Boisterous, Impulsive, Loving”